I hope to make Anne's posts a feature in our blog.   Anne gives us the perspective from Italy on daily life, cooking, food and my favorite the neighbors and friends she treasures. 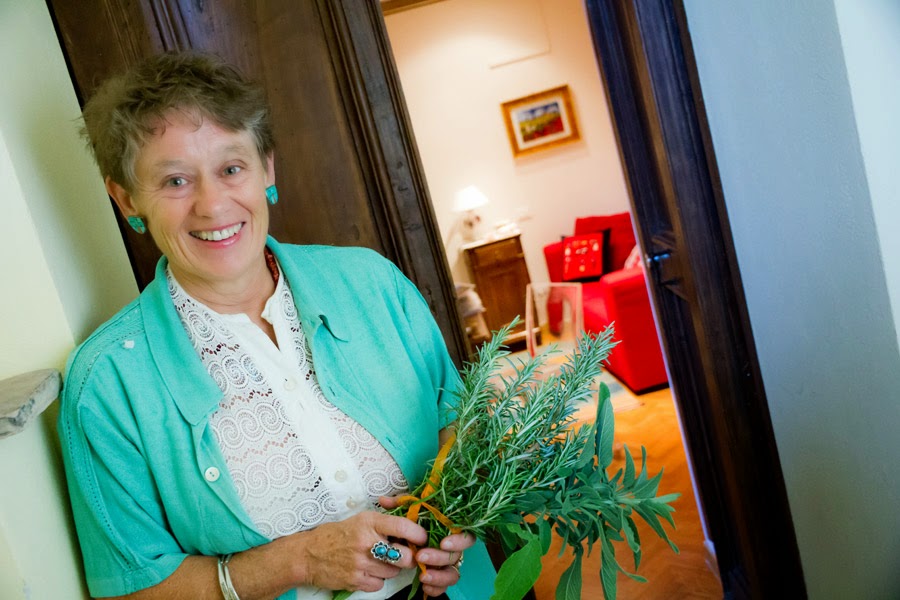 Anne Robichaud - An Umbrian tour guide in Italy most of the year, Anne also teaches Umbrian rural cuisine in private homes in the U.S. in February and March    www.annesitaly.com/Cooking.html)...and lectures.
Anne and her husband Pino worked the land for many years in the 1970's and rural life, rural people, rural cuisine are una passione for Anne. She writes frequently on Umbria and other areas of Italy. S
ee www.annesitaly.com for more on her tours, cooking classes, lectures – and her blog! Do see www.stayassisi.com for news on the Assisi apartment she and Pino now rent out!


Pila, Umbria (see map) - According to some scholars, the late Etruscan life-sized bronze sculptural masterpiece, “the Orator” (now in the Museo Nazionale Arcaelogico di Firenze) was found near Tuoro on Lake Trasimeno. But the townspeople of Pila (near Perugia) know better: as you enter the Parco dell’Arringatore, a sign next to the wrought iron gate affirms that the Arringatore was found in 1566 by a farmer, Costanzo, while plowing the Mansuetti villa vineyards outside Pila. The Etruscan presence is confirmed in the village name, “Pila” from pilae, the Latin word for stone mounds, i.e., the shape of Etruscan burial sites. The Parco encompasses the lands and gardens surrounding Villa Umbra built on the ruins of a 14th-c castle and shaded by the towering Mediterranean pines, popularly called “umbrella pines.”

What a site for one of Umbria’s most delightful sagre, Picantissima, Festival del Peperoncino. While the other area sagre fete local Umbrian specialties, Pila’s festival showcases not only favorite Umbrian dishes but also those of southern Italian regions where peperoncino reigns, each region starring for two nights of the festival. Sicilian spicy dishes lead off for the first two nights, followed by Calabria, then Puglia with Basilicata next and Campania wrapping up.

We caught one of the two Campania nights with Pino opting for a mild dish – the famous mozzarella di buffala campana – while I chose fusilli tricolori di Amalfi all’ortolana con limone e pepperoncino. A buonissimo medley of summer vegetables, Amalfi coast lemons and peperoncino made this pasta dish a festival favorite.

At an adjacent table, a more “conservative” (culinarily speaking) Perugia couple opted for a local dish, stinco di maiale con patate (pork shank with roasted potatoes). Animated groups of families and chatting young couples filled the tables around us and a magician wandered about entertaining open-mouthed children (and their mystified parents).

As at any sagra, ballroom dancing draws diners towards the music of a live band after dinner. At this sagra, exhibitions from local dance schools preceded the dancing: first belly-dancers and then a hip-hop group. The local dancing teacher closed her students’ performances with a dance pertinent to the Picantissimo Festival: she writhed and leaped her way across the dance floor to the music of a pugliese folk dance, la pizzica (“the bite”) - a dance of the “tarantella” group – rooted in the therapeutic rituals for the cure of bites of scorpions or tarantulas.
And speaking of bites: at Pila, savor the bite of peperoncino in countless tasty dishes. Picantissimo!
- Image of the Orator kindly provided by Cornelia Graco, (Creative Commons license CC BY 2.0). Many thanks!
More great photos to today's note on the website!

See www.annesitaly.com for more on her tours, cooking classes, lectures – and her blog! Do see www.stayassisi.com for news on the Assisi apartment she and Pino now rent out!