Travel to Sorrento and experience living as a local while you learn Italian!


After years of experiencing Italy as a tourist I moved to Sorrento and attending the language program at Sant’Anna Institute.


This experience was unique and even after 8 years I still am in contact with the wonderful instructors, professors and even the other students from this experience.


Now you have an opportunity to immerse yourself in one of the most charming cities in Italy.   Locals may tell you they would never consider living anywhere else!

Special offer for March and April 2017: study Italian and live in  Sorrento, Italy


Programs are available to all ages and is a great alternative to a traditional tour.


Accommodation are not included.


The school offers different accommodation options on request at an extra cost.

Agnone, another hidden treasure in Italia

Almost every week I stumble on a comment, post or reference to another 'treasure' in Italy.   It may be a stunning work of art, museum or landscape but I also discover people with a dedication to their village, crafts or ancient skills.

Agnone is a town I have not visited and had to search online for the map location.   Jenifer Landor shared some of the special people you can meet in Agnone.

"The fascinating heritage of a small Italian town in the Apennine hills -  where, for centuries the Marinelli family have been making bells"

"The 3rd oldest continuously family-owned business in the world is in Molise – in the small town of Agnone, where my grandfather’s cousins have been making bells for over 1000 years. A heritage passed down from father to son in a town famous for its artisans – gold, silver, copper, stone and ironwork among the most important."

"At one time, there were 6 families making bells in Agnone – today, only the Marinelli family continues the craft, sending bells all around the world."

"As a child growing up in America, my mother used a small Marinelli bell to call us to dinner – it could be heard throughout the neighbourhood. We dimly knew the story, and acknowledged some pride in being related to the ‘oldest bell makers in the world’. Our family visit to Agnone one summer left a deep and lasting impression on all of us. 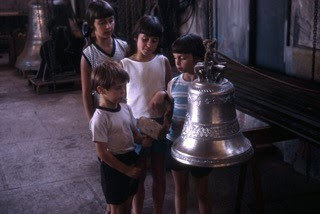 In the bell foundry as Children in the summer of 1967 –

"But it is really only now, having spent considerable time in this unique town, that I begin to understand the enormity of this heritage."

"La Fonderia Pontificia Marinelli continues today to use the original ‘lost wax’ technique of its founders. Artisans first imprint a wax form of the design onto a brick structure covered in clay, which is then overlaid with a second layer of clay to form a ‘false bell’.  When the wax inside is melted, it leaves the design imprint on the inside of the ‘false bell’."

the art room where wax designs are being created

Using an ancient wood-burning furnace, the molten bronze is heated to a temperature of 1200c (2200f) and poured into the gap between to form the bell. 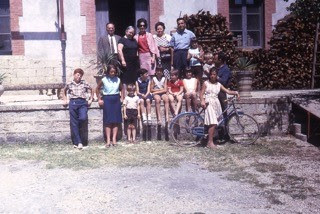 Outside the foundry with various cousins and its then director, Zio Pasqualino.

The Marinelli Bell Foundry after WWII

"The process of creating a bell in this way, entirely by hand, takes a minimum of 3 months and requires enormous strength, courage and concentration. The mould is placed in a deep pit where it is buried in sand and soil which has been carefully patted down to prevent the slightest movement. When molten bronze flows into the space between the ‘soul’ and the ‘false’ bells, a priest says a blessing and the workers come together to offer prayers. As the bell begins to cool, good wishes are exchanged. Later it is sanded and polished and the clapper is added to produce the correct sound." 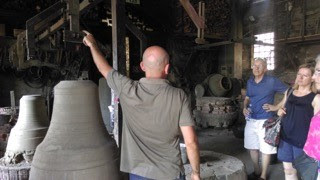 Take a look at the foundry - https://www.youtube.com/watch?v=n2lFmCReiP8

"In 1924 Pope Pius XI granted Papal status to the foundry – hence, its official name, Pontificia Fonderia Marinelli. 30 years later, the Italian President honoured the Marinelli Family with a gold medal for their prestigious work and status as the oldest family business in Europe.

Some of the famous bells created at the Marinelli Foundry are: 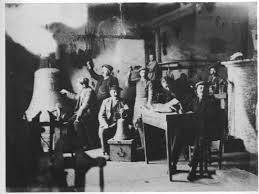 "Agnone is a simple and modest place, its inhabitants are fiercely proud of their heritage and the traditions of their ancestors."

"If you are thinking of an experience in a small town to learn Italian and meet the locals contact":

Meanwhile contact her directly.
LIVE AND LEARN ITALIAN invites you to combine Italian study with exploring the traditions and everyday life of the region, mixing with the community and engaging in local activities. Of course, a visit to the Foundry is high on the list of special events.
http://liveandlearnitalian.com/