Can anyone tell me how to find the Pizza School in Napoli?

While  in Sorrento, italy I visited Napoli for the San Genero Festival and street procession (I am Italian American but may have been the only non local there) I saw signs for a  Pizza School

taking the phone number was a waste of time since my language skill are that of a 3 year old and the school would not have thought I was trying to make a tomato delivery to the kitchen!

Back to Pizza. I want to learn to make Pizza in Napoli, where Pizza was born. Can someone tell me where to find this school? A helpful reader told me about the professional chefs school for pizza. 26 weeks would be great but of course not possible. Besides, when the head chef yells slice the mozzarella, i might be picking up a pepperoni!!!!

So my quest for the Napoli Pizza school continues.
Meanwhile, I did watch the cooks at Piazza Fiore in Rome make Pizzia! 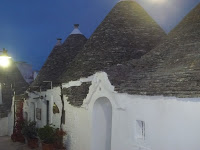 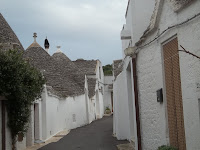 Come visit for the fantasy, stay and enjoy the endless kindness of the people of Alberobello.
Yes I visited Alberobello to see the Trullia house I had heard so much about.  They are listed on the World Heritage list and although it is a life ambition to visit most of this list, I know it will not be possible.  But I shall visit as many sites in the countries I do visit in the next 10 years.
My Visit:
Being off season, I didn't expect many tourists and only found a few from the cruise ship, tour bus that stopped for a few hours.  The balance of the 1 day I could stay in Alberobello, the streets were amazingly quiet.   The staff at the "tourist shops"  were always outside, cheery and very welcoming.   They made you feel at home not as an inconvenience or as just part of their job,  as in so many other "tourist locations".
I chose to stay in one of the traditional homes for the "experience" but what I did NOT expect was how kind everyone was:  from the staff at the rental office and the stores to locals I met at the deli and other non tourist locations. 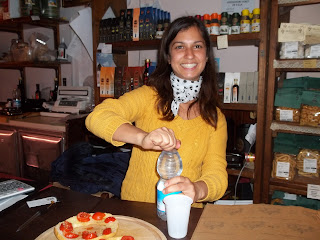 Read more »
Posted by Lee Laurino at 4:05 PM No comments:

Pasta Lesson in Puglia with Nonna

What do you do when you no longer have a grandmother who can teach you all the great secrets of great Italian food?
What a wonderful day in Lecce, Italy.   This 85 year old Italian grandmother shared her years of experience making fresh pasta with an Italian American who speaks very little Italian.      But that did not matter, this group of Italians shared their time and knowledge freely.

There is a BIG difference between dry and fresh pasta!  I never knew how the different shapes were created and have even found the ribbed wooden block so I can make the rolled pasta seen in the video.

Yle made all the arrangements for me to find an Italian grandmother (Nonna) who could show me how to make pasta.  I plan to return and learn how to make dolce and biscotti (cake/cookies).

A special thank you to Debora for translating throughout the day.      Martha Stewart I am not, but sono una Italian!

Email ThisBlogThis!Share to TwitterShare to FacebookShare to Pinterest
Labels: Pasta Lesson with Nonna

Are you "invisible" when you travel? Or do you make a "statement"

Have you seen the shows where someone is selected off the street for a  "make over" ?
How bad do you have to look to be selected from a crowd in a city of millions?

My 2012 adventure home to Italy this November had a stop in Great Britain.  The Queen Mary took me from NYC to Southampton, so I planned 2 days in London.  The city is always changing but it has been many years since I visited.

While watching a street performer yell at a tourist about not saying thank you a young man approached me.
One, I am always invisible when I travel.    I travel with a low profile but it sometimes amazes me that I can go unnoticed most times.   The only time this is annoying is when you want to order a meal or pay for something in a shop or an outdoor market.  But it all works.

So when I was asked if I would like a "free" hair cut make over I was surprised I was noticed by the employee assigned to go out into the street and find someone  AND then I was a little annoyed that I must have looked so bad I looked like I needed a make over!

I shared this with my hair stylist as soon as I returned.   She now has the mission to fix me so that I am invisible again.
Posted by Lee Laurino at 11:37 AM No comments:

Email ThisBlogThis!Share to TwitterShare to FacebookShare to Pinterest
Labels: invisible travel, make over, selected for a make over, solo travel

My adventure in Puglia, Italy

After many trips to Italy I decided to explore some of the "secret" areas of Italy that I know nothing about.
Sicily and the area north of Venice have been on my list for a long time but then I met Yle.

I believe I "stumbled" on Ylena on Face Book, or she found me at HometoItaly.com  but it was a fortunate encounter!   info@yltourcongressi.com

Yle encouraged me to come and visit Puglia.  I had a last minute opportunity to sail on the Queen Mary II in October.  With a connection to Firenze (and a number of adventures in London) I was on a train to Bologna and then along the eastern coast of Italy on my way to Puglia.  This is the south eastern part of Italy, most noted for the connections by ferry to Greece.  But what a surprise.
It is not Tuscany, does not look like Umbria and does not have cities as large as Rome or Florence.  But I did find some hidden treasures that proved a week was NOT long enough to explore the small towns, the coastal routes and the slow wonderful way of life.

From Bologna I stopped at  Barletta, about a 6 hr train ride.  Some of the ride was actually along the coast and it was a very stormy day so you could see the waves crashing on the shore.  I chose Barletta for several reasons.  I needed a town with a connection to my next stop, Bari and being off season I needed a hotel with a restaurant.  Why?  Traveling solo it is always a challenge to find a place to eat that is comfortable for a solo.   This was a Sunday which means some of the restaurants would be closed.  Finally Foggia (the biggest town on my route) had no hotels (in my 100E a day budget) so I selected Barletta and a hotel on the beach.   That is another story.  How kind the staff was from picking me up at the train station in the middle of the storm to saving me some lunch when I arrived after the restaurant closed.    This was a life saver because there was 4 or more inches of rain in the street and NOTHING OPEN.    So now I know to look for hotel restaurants when I travel.
After 3 days I arrived in Lecce and met Yle.   Let her tell you about her wonderful company that can help you design a vacation or adventure that is what you have dreamed of doing in Italy.
http://www.youtube.com/watch?v=y50e4I4aiMU


Email Yle at info@yltourcongressi.com  and tell her what you have always wanted to do in Itlay:
cooking instructions, wine tasting, search for your family village, art, culture, history  the opportunities are endless.