Certosa closing outside of Florence: 4 monks are being relocated.

I just read about the closing on the monastery with only 4 monks outside of Florence.

You may have read my post from the very interesting visit I made a year ago with a local expat and friend Sheila.

I am very sorry to see the closure of this amazing complex.   If I can return to Florence in November I shall take another bus trip out to visit the monks before they are relocated.   Just hope they continue the daily tours or I shall be attending a Sunday mass! 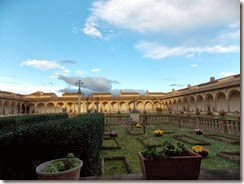 Story from the Florentine:

The end of Certosa

From monastery to museum?

Only four monks remain at Certosa di Galluzzo and their religious order has instructed them to leave by the end of the year.


The first Cistercian monks moved into the fourteenth-century religious complex in 1958, replacing the Carthusian order. In the beginning, Certosa flourished, training the young brotherhood to become priests, but the vocation was lost gradually and no younger generation has taken over the reins.

The four monks, infirm and ageing, still living at Certosa are no longer able to take care of the vast religious complex by themselves. Owned by the State, the superintendency for architectural and landscape heritage of Florence is taking over the management of Certosa—the monks will leave by the end of the year.

In an article in local newspaper Corriere Fiorentino, Padre Luigi, one of the four monks left at Certosa, commented, “This place will change from being a monastery and become a museum, and it will lose its spiritual essence… We have done a lot here. Now it will be up to someone else not to disperse our work.”

In their 60 years here, the monks have worked hard to support themselves, receiving no support from the Church: preserving books and making jams, ancient-style liqueurs and ceramics, as well as offering guided tours, including the priceless frescoes of Pontormo, maintaining the monastery and holding public mass on Sunday mornings.

The story noted above in the Corriere Fiorentino is in Italian and the online translation is not great, ut I will share it with you as well


Choc Charterhouse, the farewell of the monks
The four leave the religious complex of Galluzzo later this year: "we are too few, now nothing will make more sense
by Jacopo Starlings
by
I AM INTERESTED IN

A- A +
shadow
total votes
1
0
1496
2
To Watch
Highlights onoff
Print
Listen
Email
After nearly 60 years, the Cistercian monks at the end of the year will leave the Certosa del Galluzzo. The first arrived here in 1958, instead of the carthusians. There was the student to become priests, many monks and many vocations. Then, decade after decade, that vocation has faded gradually. The monks are aged, many have died. There was generational.
Today they remained only in four and alone cannot sustain this large monastic complex, one of the most beautiful in Italy. The facility, owned by the State, will change management. The monks will leave by the end of the year. Instead of monks, will replace the Superintendence. Father Luigi, one of 4 monks were, says: "this place will be transformed from a Museum, and will lose its spiritual essence. In any case, no regrets: ' we have done so much, now it's up to someone else not to lose our jobs. As for us, it's not the House that makes the monk. "
The saddest is Father Saleem, arrived here in 1958, when he was only 19 years old: "our order has decided so, but leaving the monastery I lose a piece of life, I won't be able to work anymore, nothing will make more sense." He lives locked up ten hours a day in his laboratory for the restoration of old books. Volumes even in the fourteenth century, arriving here in dramatic conditions and that, thanks to their experience, they come back to life. The reputation of Father Sixto took him in universities and libraries of Russia, Argentina, Egypt, Chile.
Here in the monastery sleeping in cells, wake up at 5 and then two hours of prayers. Then get to work up to 19. There is the restoration of books and the production of jams, the collection of figs and oranges, the distillery where liquor with ancient methods and the pottery workshop. Monks handyman, that self-support without receiving salary from the Church. And then the guided tours, morning and afternoon, maintenance of the monastery and the public mass on Sunday morning, in addition to the summer theatre of the chairs. "We've always done it all ourselves — says Father Luigi — but now we were too few."
Especially as one of the four monks, the eldest, the prior Roberto, is ill and no longer able to work. Then there's Father Berenè, Eritrea, also sorry to leave. The Carthusian monastery there are works of great value, such as the frescoes by Pontormo. Will remain almost everything here. But the monks fear for the future of this religious stronghold. Father Sisto looks around and sighs worried: "Let's just hope it doesn't become a hovel."
July 9, 2016 | 11:30
© ALL RIGHTS RESERVED