I am not sure how I ‘found’ Daniela, the owner of a unique language opportunity near Venice, but she continues to share wonderful stories about Venice.

Proves to me that even after 20 years of going Home to Italy, I have only seen a small part of this wonderful land that Italian Americans call home……
Sep 26, 2011 by Daniela

Apart from being so richly endowed with natural, artistic and human beauties, my beloved homeland is always lavish with events that lead to very interesting discoveries.
This is definitely the case with the conference I attended last Thursday during which the very well prepared Alberto Toso Fei told us about Venetian stories and legends that have enriched and amused me.
I would like to share with you some of these stories because I find them extremely interesting. I believe that when you come to Venice you will look from a different perspective at the monument I am going to tell you about right now: not to mention that you will surely impress the person who accompanies you by telling all these new facts you are going to learn now.

The famous, or rather very famous, monument I want to tell you about is the Rialto Bridge. As any proper bridge, also this one connects two vital and very central parts of Venice, both of them related to trades, albeit with two differing identities: on the one side Saint Mark, representing the center of the republican power and the part of Venice where the most affluent Venetian families lived; on the other side San Polo, the throbbing heart of the city’s life, where merchant activities were concentrated, mixed with other less noble trades: indeed, it was here where many taverns were located and, in particular, where prostitutes practiced their business.

The bridge made of stone that we see today is the fourth one built. The first wooden bridge was destroyed during the riots of Bajamonte Tiepolo, which exploded on June 15th, 1310. Thirteen years earlier, the Closing of the Great Council (Serrata del Maggior Consiglio) established that only the representatives of some families could be elected “doge”. Of course, this was the cause of great turmoil among the excluded families and their disappointment led to the 1310 riots. Bajamonte burned down the Rialto Bridge and then marched with his army to the Doge Palace.

Not far from St. Mark’s square, just before the bell tower (that at that time was not yet built) a woman, Giustina Rossi, hearing the noises coming from outside, opened the window of her house. While doing that, she forgot that the evening before she had left a stone mortar on the window sill (the story does not tell us what dish she prepared with it): the mortar fell right onto the head of the insurgents’ standard bearer, who were so flabbergasted that they surrendered. The Republic asked the lady what she wished to receive as a reward for saving Venice in such a dramatic situation. In a patriotic fashion, she simply asked to display St. Mark’s banner at the window on festive days and she was also granted a freeze on her apartment rent.

One of her heirs, a few centuries later, left the house to embark on a long trip. When he came back, he found out that the rent had been increased. He protested by pointing out who his ancestor had been and the rent was brought back to the agreed price: this way the Republic showed everyone that it had not forgotten Giustina’s merits.

Today you can still admire a bas-relief, located before the entrance to the Square from the Mercerie, that reminds you of that incident. If you look up, I am sure you will easily find it.  Alternatively, this could be an opportunity to practice your Italian a bit by asking a Venetian: «Dove si trova il bassorilievo di Giustina Rossi?» («Where is Giustina Rossi’s bas-relief?»).

A new wooden Rialto bridge was built after Bajamonte had destroyed the previous one: but it collapsed in 1444 under the weight of the spectators who had come to witness the bridal procession of the marquis of Ferrara. The third bridge, also made from wood, was a drawbridge and there is still a picture of it in a painting by Carpaccio exhibited in the Accademia museum. The fourth bridge, the one made of stone, is the one we still see today and of which I will tell you about in one of my next articles.

Posted by Lee Laurino at 3:31 PM No comments:

Ferragosto an Italian ritual of the August holiday when many city shops and restaurants  are closed.  According to Wikipedia the “term Ferragosto is derived from the Latin expression Feriae Augusti (Augustus' rest), introduced by the emperor Augustus in 18 BC.”

Today, many Italians vacation at the seaside.  Unlike beaches Americans might recognize with endless sand and waves to surf in, Italian beaches can be small coves, rock covered inlets and often ‘businesses renting chairs and umbrellas placed on every inch of the shore line as well as platforms constructed sololy to allow sun lovers to be as close to the sea as possible!
This past August my friend Isabell took her vacation in Puglia.  She shares her impression of her first trip to the sea in Puglia. 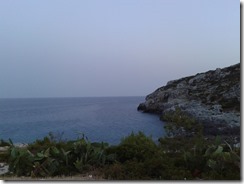 Puglia, South of Italy, further South you’ll find the beautiful Salento Region.
Pebble beaches with crystal clear water and local cuisine with fresh ingredients, handmade pasta, sun ripened vegetables and the most delicious fish dishes. Not to forget the crunchy homemade bread that will be put immediately on your table. Of course Puglia is also famous for its olive oil and has a large selection of local wines.
Medium size hotels and apartments to rent do not allow mass tourism to destroy the pleasant atmosphere. Places to visit could be Santa Maria di Leuca situated along “lungomare” which offers equipped beaches, several restaurants and a centre with a few shops, if you are looking for untouched nature Novaglie could be worth a visit. Families, couples, singles of every age mingle in a friendly atmosphere.
Visitors are mostly Italians, many from Northern Italy and Tuscany and a few Europeans, hardly any Americans.
So when exploring Venice, Florence or Rome, why not include a trip to Puglia to discover the “real” Italy and enjoy not being treated as a tourist, but as a visitor. Live “Italian” - at least for a while. 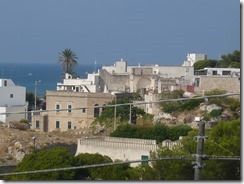 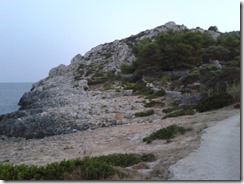 Email ThisBlogThis!Share to TwitterShare to FacebookShare to Pinterest
Labels: puglia, vacation location even for Italians

Another great contact in Italy is Cherrye Moore at My Bella Vita   http://mybellavita.com/    I ‘met’ Cherrye on line while researching expats in Italy. 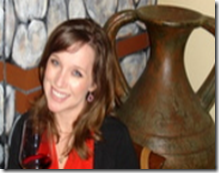 Cherrye has a wonderful story on her life in Italia, her BnB, family ancestry searches and table tours…..  http://bit.ly/18p0Fvi

8-Day Tour of the Pollino Mountains and Tropea

Day 1
Folk Music Feast
You will arrive at Lamezia Terme International Airport this morning and be met by us, Cherrye Moore and Tania Pascuzzi, your bilingual hosts, who will join you throughout The Calabrian Table Tour. We will transfer via private car service to northern Calabria. There we will check into our mountain retreat. In the early evening we will transfer to a nearby farm where we will meet Nicola, a retired engineer who has dedicated his life to preserving the history of the Pollino. We will join his wife, Caterina, and enjoy our first cooking class in the Pollino Mountains where we will learn to make homemade pasta and famous Calabriansalsiccia. We will end Day One with a private feast, complete with live Calabrian folk musicians from Morano Calabro. Day 2
Zotërote flini arbërisht? Calabria’s Albanian Influences
We will have breakfast, then set out to explore the heart and soul of Pollino’s Albanian culture. We will visit a local village, where the Albanian heritage still thrives and have the chance to see the famous Ragnanello Gorge, the deepest gorge in Europe. For lunch, we will feast on Albanian dishes that feature the sweet paprika that is commonly used in these villages. In the late afternoon we will take a guided walk through Morano Calabro-one of Italy’s 100 most beautiful villages-and step back in time to explore village’s castle and winding historical center. Day 3
Hike and Harvest
We will spend the morning on a mild walking excursion through the Pollino Mountains. During our hike, we will encounter the rare and beautiful Lorica pine, a tree that is found only in this part of the world. We will step back in time and stop for a picnic lunch a sacco, complete with local bread, frittata, salamis, local cheeses and wine, all set with a backdrop of pine trees and mountain views. In the afternoon we will visit a local cheese factory. For dinner, our host, Adriana, will prepare the meal that won her first place in a national culinary competition. Day 4
Pollino, Polenta and Preserves
We will enjoy a breakfast before pushing up our sleeves and starting our full-day, hands-on cooking class with Adriana. This nationally-known cook will teach us to make frascola, a traditional polenta dish only found in the Pollino Mountains. She will teach us how Calabrians prepare fruits and vegetables and we will watch her transform them into jams, conserves and sott’oliojarred specialties. We will enjoy the rest of this festive day by eating our creations al fresco with Adriana and her family. Day 5
Chic Calabrian Cuisine

Read more »
Posted by Lee Laurino at 2:53 PM No comments: