Rome offers Surprises: You just have to search


I spend my weeks Home to Italy, walking the side streets, neighborhoods, cemeteries and markets
I discover in each part of the city I explore.   Often a small, plain entrance can offer an amazing surprise and on this day I was not disappointed.

Walking away from the Basilica di Santa Maria Maggiore on Via Merulana take the short parallel street Via di Santa. The side entrance (photo above) is easy to miss. 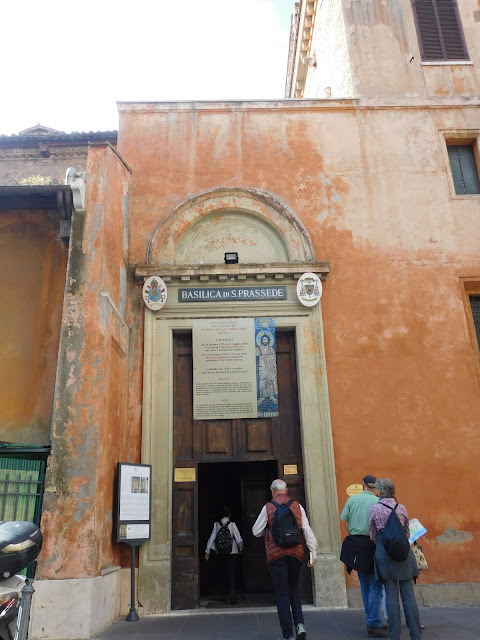 Since many Italian churches welcome visitors during the hours they are open I followed a few locals  and visitors inside expecting the usual rows of seats and dark alcoves along the sides.

Greeted by the gleam of thousands of mosaic pieces you crane your neck to try to see everything.
There is no tour guide at the entrance but you can purchase on the honor system, a brief brochure within the church. 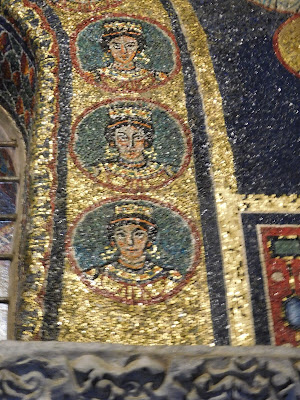 The Interior reminded me of the mosaic work in Santa Maria Trastevere, Rome.  Impossible to estimate the number of tiles used even in one picture but in an entire ceiling it may be many thousands.  The stunning pictorials and patterns instead of frescoes or oil paintings is a startling change from the other churches in the city. 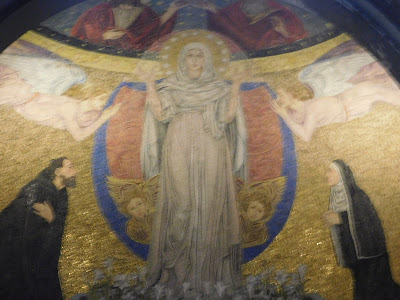 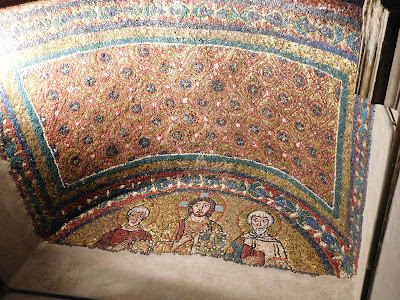 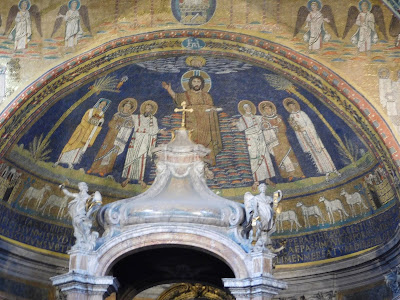 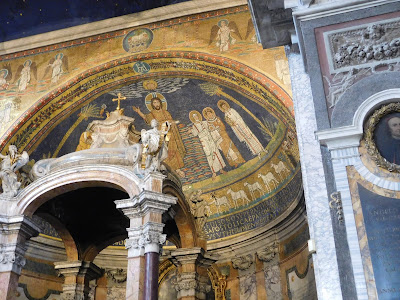 Sadly I arrived shortly before the church closed for lunch!
On my next trip to Rome I shall return with more of the church history and information on each of the stunning mosaic scenes.   You may find that the art is captivating, the clarity of the figures change as you walk closer.

For more details see the following from Wikipedia: 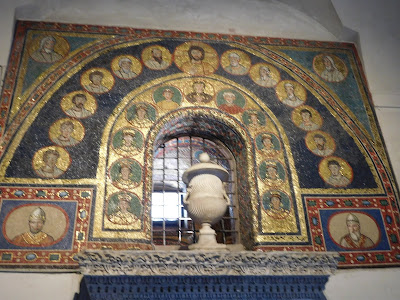 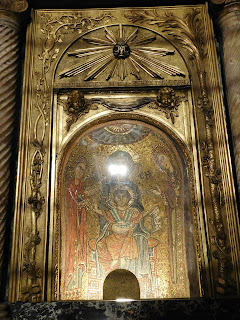 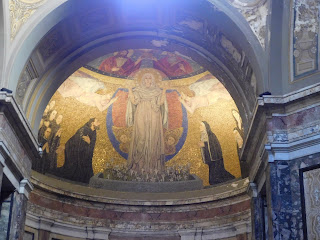 "A church near this site was present since the fifth century, but the church in its current place and general layout was commissioned by Pope Hadrian I around the year 780 to house the relics (bones) of Saint Praxedes (Italian: S. Prassede) and Saint Pudentiana (Italian: S. Pudenziana), the daughters of Saint Pudens, traditionally St. Peter's first Christian convert in Rome."

"The church was built atop of the remains of a 4th-century ancient Roman Thermae, privately owned by the family of Pudentiana, and called Terme di Novato.     The two female saints were murdered for providing Christian burial for early martyrs in defiance of Roman law. The basilica was enlarged and decorated by Pope Paschal I in c. 822.
Pope Paschal, who reigned 817-824, was at the forefront of the Carolingian Renaissance started and advocated by the emperor Charlemagne. They desired to get back to the foundations of Christianity theologically and artistically. Paschal, thus, began two, linked, ambitious programs: the recovery of martyrs' bones from the catacombs of Rome and an almost unprecedented church building campaign. Paschal dug up numerous skeletons and transplanted them to this church. The Titulus S. Praxedis was established by Pope Evaristus, around 112.
The inscriptions found in Santa Prassede, a valuable source illustrating the history of the church, have been collected and published by Vincenzo Forcella.
The church contains the oratory of San Zenone.
The church provided the inspiration for Robert Browning's poem "The Bishop Orders His Tomb at Saint Praxed's Church."