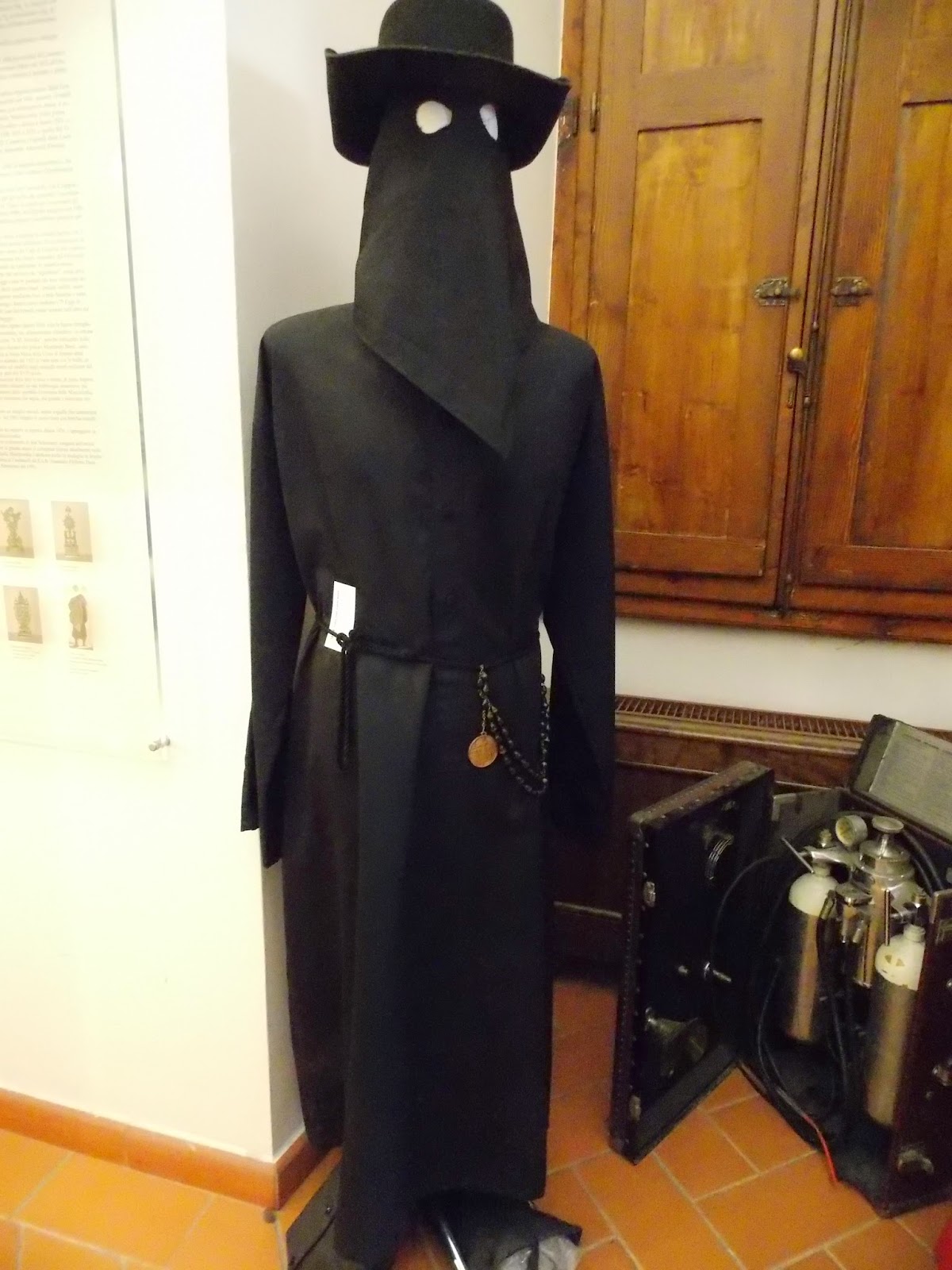 *  Just read that the museum has been renovated!
http://www.theflorentine.net/articles/article-view.asp?issuetocId=10585


The Misericordia has an ancient history in Florence although Thousands of tourist pass this building but have  no idea what is behind the ornate door across from the Duomo.

I visited the museum of the Misericordia on the only day there is an English tour:  Monday.  However, don't expect a fluent dialogue of the history and the items on display.   My host was most gracious and patient while I tried to interpret her information or ask questions in my very limited Italian.

There is an English brochure that gives a fascinating history behind the modern day ambulance workers.   *All facts and information in this post are from that brochure which was printed in May 2014 with texts by Silvia Nanni.

This sinister mode of dress hides the fundamental basis of the Misericordia, charity and service to their fellow man. 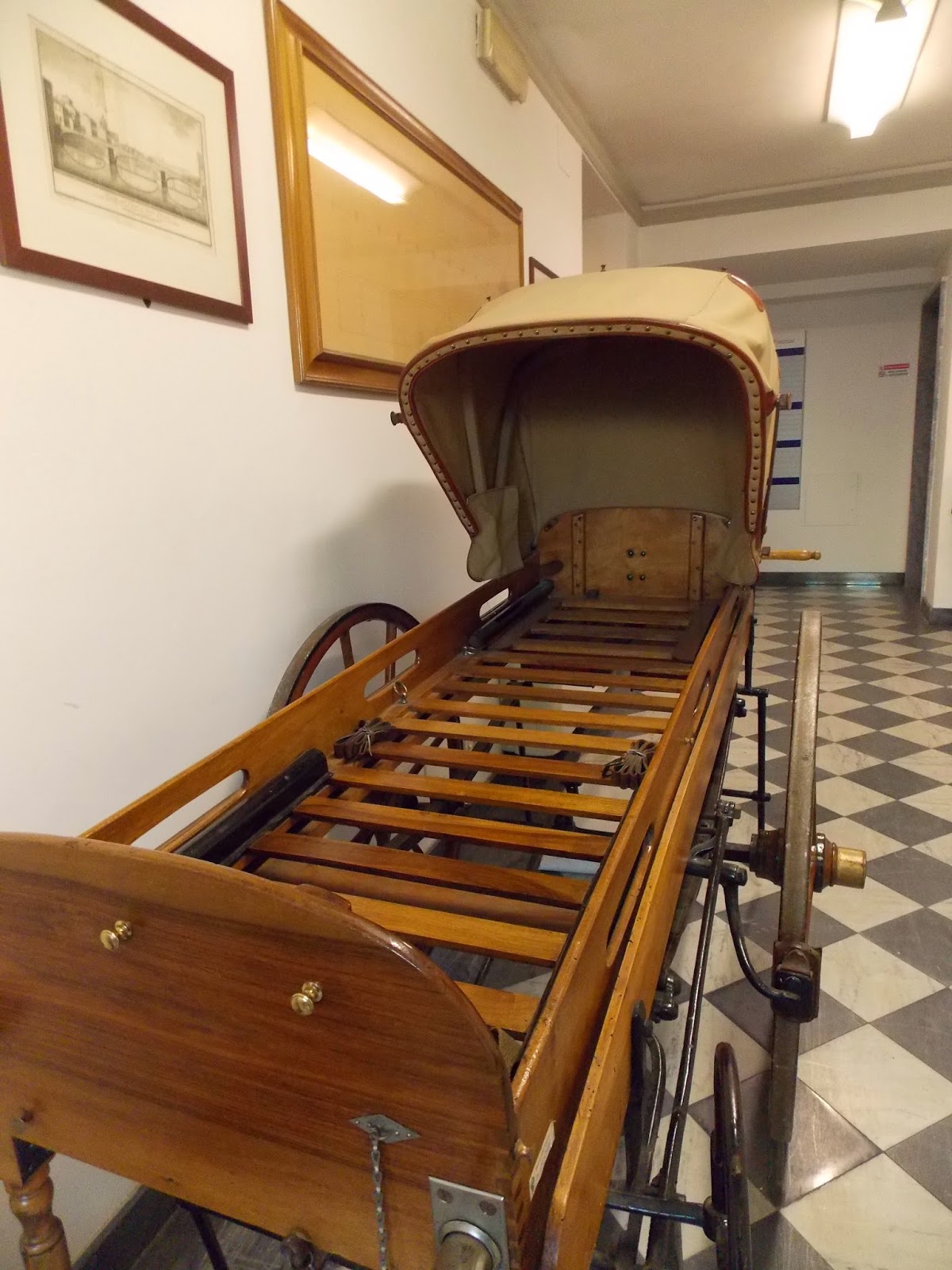 "Members of the Misericordia have assisted in the transportation of the ill to hospitals as well as in burying the dead".  "During the numerous plagues from 1325 onwards, the Misericordia showed great courage and kindness, walking through the streets to help those afflicted".

Their faces were covered to keep their identity hidden and to be anonymous.   To warn people that they were transporting a plague victim a bell was rung.    This alerted towns people to keep moving and not risk exposure.

WWI the provided transported wounded soldiers.  In WWII's aerial attacks and resistance fighting in the streets and during the flood in Florence they continued to serve the sick in Florence


“ The venerable Archconfraternity of the Misericordia of Florence is one of the oldest institutions of the city, having been founded in the 1200s.  An ancient legend tells us a most interesting story related to its origins.”

“Florence of the 1200’s was a city engrossed in its trade and commerce:  two important fairs were held each year and on such occasions a great number of men were employed for the transport of merchandise.   The porters usually sheltered themselves from the rain in the Adimari’s basement or cantina situated in Piazza San Giovanni.

In the year 1240 among these workers was Pietro di Luca Borsi, a very devoted many that tired of hearing his fellow workers’ curses, suggested that each time the name of God or of the Virgin Mary was taken in vain, a coin (crazia) should be placed in a box as penitence for the offense committed.   (could this be our contemporary ‘swear jar’?)

Soon a large sum of money was accumulated and again prompted by Borsi, it was used to buy six baskets-zane- each capable of containing a person.It was established which porters had to carry the zane week by week, receiving a coin (giulio or paolo) for each trip they completed in carrying the sick to the hospital or any person that had been found on a road in need of medical assistance.  Note:  Historians proved Borsi did not accomplish the above)”

There is an extensive description of the political and social conflict and religious influences in Florence that finally led to the establishment of this organization who’s members always did the utmost in the transportation of ill to the hospital as well as in the burying of the dead.   Later its obligations spread to:  liberating debtors from prison, providing subsidies to the indigent ill, dowries to improvised girls as well as providing for the decent burial of the poor.”

“Perhaps the Misericordia did their most courageous work during the many plagues.  Walking the streets with their characteristic ‘buffa’ (hood) with the lower part covering the benefactors identity.   It was believed charity had to be done anonymously.     During the 1630 plague a member walked ahead of the  ill or corpse and rang a bell to warn the population and clear a path.”


Now I find the title Misericordia on the ambulances in Firenze.  I wonder if this is the foundation for modern day volunteers.