I look forward to new posts by Browsing Rome. There is always something new or added features on popular sites I have already visited.  Rome can keep you busy for weeks or years.

If you have been to Rome a number of times you may consider one of these great day trips to experience Italy!   There are several still on my list to see.

View other great stories on the Browsing Rome site.  I always find something new on her web site.     http://www.browsingrome.com

Built in the 2nd A.D as the summer residence for the Emperor Hadrian, the complex covers an area of 300 acres and is today still impressive. An architectural and engineering masterpiece by any standards, Hadrian’s Villa comprised of over 30 buildings including several thermal baths, palaces, libraries and temples! Walking through the ruins and vast complex, you can easily imagine the grandeur of the villa.

Villa d’Este with its glorious gardens and stunning fountains is simply breathtakingly beautiful! Elaborately designed the fountains are a spectacular. The most acclaimed, the “Organ and Neptune” fountain with cascading water and jets of water spurting high in the air, is a theatrical performance that will leave you spell-bounded. And with names like the “Avenue of the Hundred Fountains” and the “Fountain of the Dragon”, be ready for a visually stimulating experience. 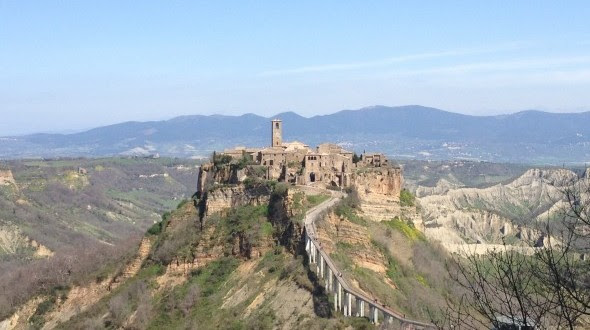 Civita di Bagnoregio
The crumbling of its foundations through the years has created this impressive setting and today it is known as the “dying town”. Located between the borders of Lazio and Umbria, Civita di Bagnoregio is far from “dying” and with recent media attention, this vibrant and thriving town is experiencing a revival.

Literally translated to “Roman Castles”, visitors will be surprise to learn that Castelli Romani are 13 hill-towns situated 20 km (12 miles) south-east of Rome in the Alban Hills (Colli Albani). While the name Castelli Romani may not ring a bell, most visitors are probably familiar with two of its better known towns: Castel Gandolfo, home to the Pope’s summer palace, and Frascati, famous for its superb white wine.
However, don’t miss out on the smaller towns like Nemi renowned for its wild strawberries and Ariccia for its specialty, the mouthwatering “porchetta”. With splendid villas, verdant countryside, stunning lakes, and fabulous food and wine, it makes for a perfect and easy day trip from Rome.

Villa Lante, in the town of Bagnaia near Viterbo, is truly off the beaten path. It’s one of the most enchanting places I’ve visited and with barely any visitors, you find yourself immersed in tranquility.
Starting in a green and serene area open to the public, you couldn’t miss the Pegasus Fountain representing the Greek myth of a winged horse striking the earth with its hoof and thus bursting a spring. This is only a premonition of things to come. 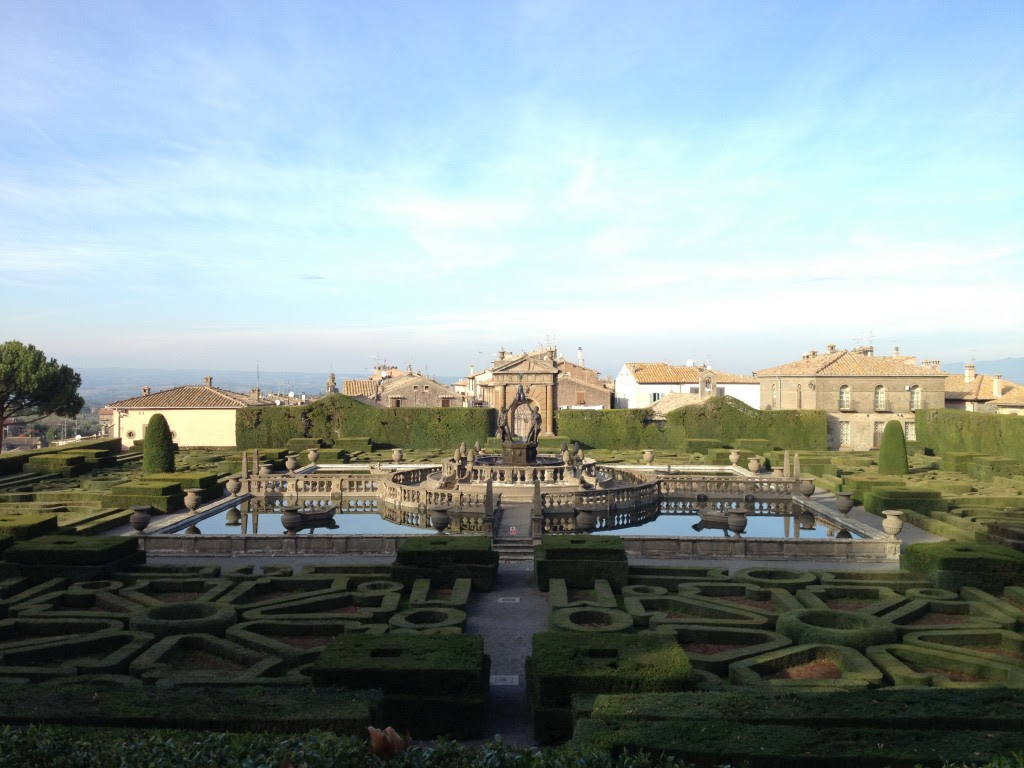 Stunning!
For a small fee, you get access to the beautifully well-manicured gardens with the fairy-tale like fountains on 4-tiered terraces. While I can’t put my finger on it, there’s something magical about the place – so much so that it makes you feel like you’ve accidentally wandered into an enchanted garden.

A spectacular pentagonal building situated above the town of Caprarola, Palazzo Farnese was the brainchild of Cardinal Alessandro Farnese , the future Pope Paul III. Also situated in Lazio, the 5-floor Palazzo boasts an array of rooms filled with some incredible frescoes.
At first glance, the façade and the entry area of the Palazzo look plain and worn. But the spectacular spiral stairs taking you to the first floor gives you a preview of things to come. One of the most remarkable rooms is the Room of the Map of the World.  Keeping in mind this was completed in the 16th century, the room had paintings of continents and countries which were shockingly accurate.
Once you have finished the tour of the interior, don’t miss the gardens! With striking fountains in the Upper Gardens, it’s a sight to behold. 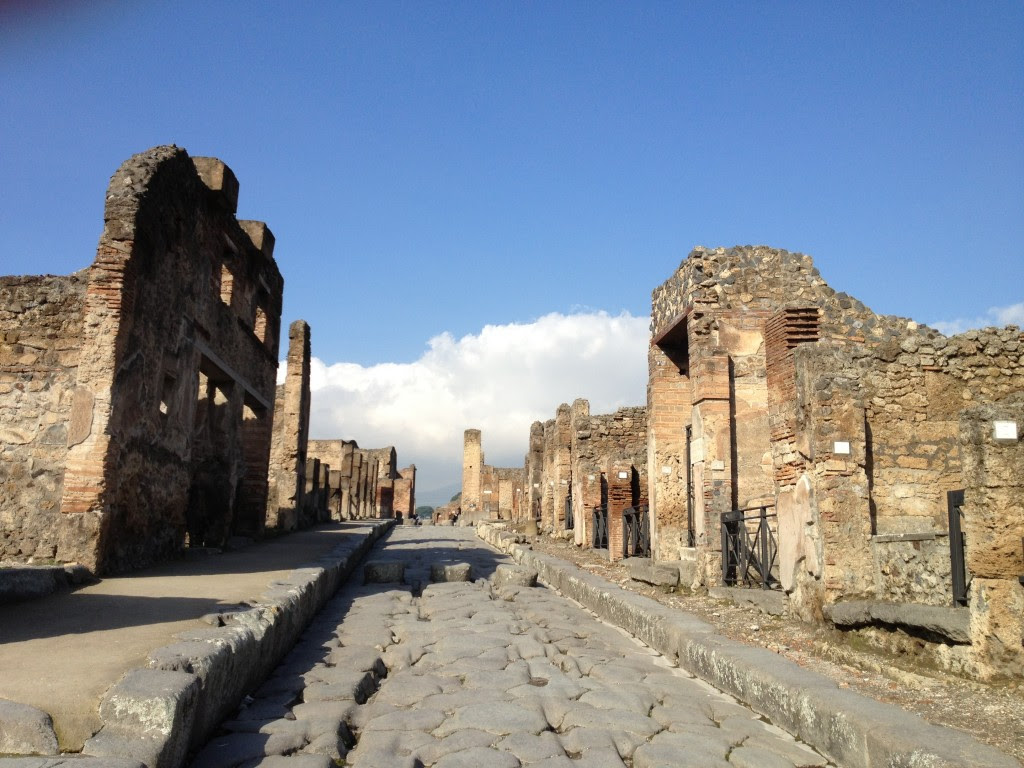 Caserta is not known as a tourist destination but the 18th century Palace, modeled after Versailles, is a hidden gem worth visiting. Built for the Bourbon kings of Naples, this grandiose palace covering 45,000 sqm (over 480,000 sq ft) is divided into 4 wings and has over 1200 rooms, including some elaborately adorned apartments.
Equally stunning is the garden which covers an area of about 120 hectares (296 acres). The main central path that runs 3.2 km (2 miles) long from the palace features a number of spectacular fountains, with the majestic Great Fountain of Diana & Actaeon located at the end of the stretch.

One of the many picturesque hill towns in Umbria, Todi is often overlooked by visitors. Lying in the southern part of Umbria, the town’s low-key and laid-back pace offers you authentic and genuine experience. 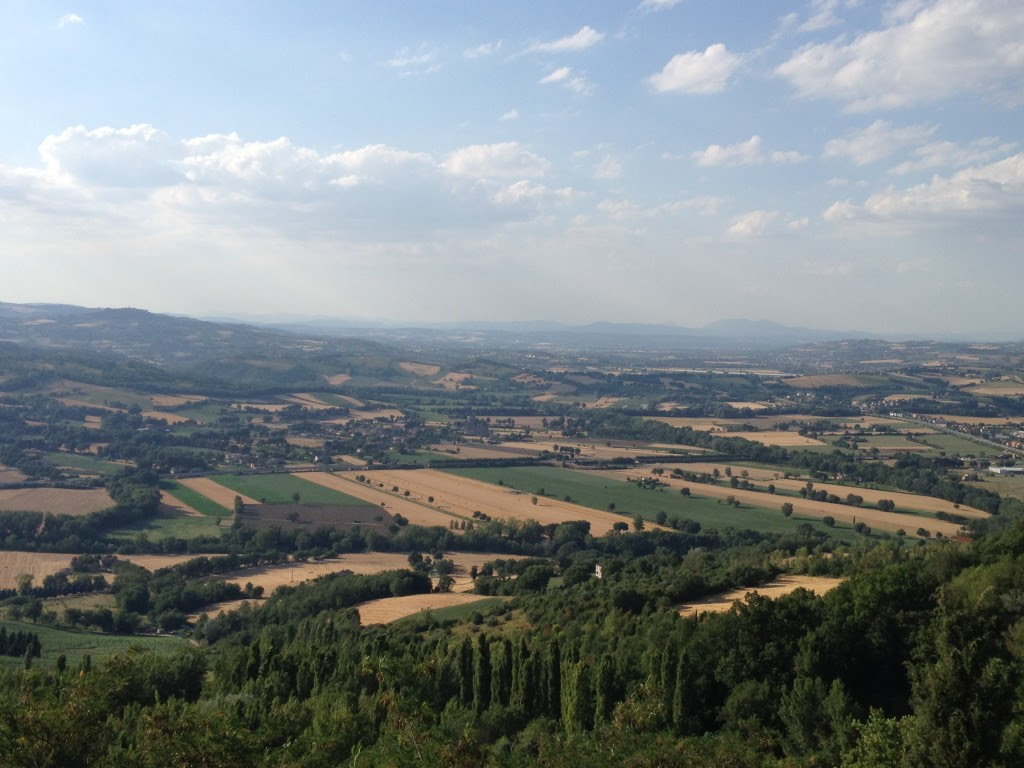 Views from Todi
This charming town won’t wow you with massive and elaborate churches but instead, with its many intriguing gems. From the unfinished 12th-century church where one of the most renowned Italian poets, Jacopone da Todi is buried to the lovely Piazza del Popolo to a fascinating “Painted House”, Todi is guaranteed to win you over.

How about talking a walk on the wild side?  If you are looking to experience a hike that will reward you stunning views, head to Monte Soratte. Just 60km (37 miles) north of Rome, Monte Soratte offers 11 different trails of varying difficulty and no,  it’s not necessarily wild – unless you want it to be! At the peak, you will be awed by the unobstructed panoramic views of surroundings and surprised to find a hermitage with frescoes from the 14-15th century.
If you have time after your hike, drop by the Abbey of St. Andrew in Flumine (located close to the highway) which boasts a stunning Romanesque church with beautiful frescoes dating back to the 8th century.

A small town which was already a flourishing center of trade and arts between the 6 and 4th centuries B.C, Orvieto is layered in history. Sitting on the plateau of a volcanic rock, this town surrounded by a defensive wall is home to the splendid Cathedral of Orvieto with its remarkable Gothic façade.
Beneath the town lies another layer of its fascinating history – a maze of Etruscan caverns, wells and quarry as well as a medieval olive press. And after all the sightseeing, you’d be wise to enjoy a glass or two of the famous Orvieto Classico before returning to Rome. Ostia Antica
Ostia Antica, 20 miles from Rome, dates back to the 4th century B.C and with its well-preserved ruins and roads, it offers you a glimpse of the past! Once situated where the Tiber met the sea, the town first served as a military outpost before becoming a thriving port.


Walking along Ostia Antica’s main street, Decumanus Maximus, is an eerily fascinating experience as you pass by markets, necropolis, baths, a remarkable theater, the forum and temples. This is only one of the several paths in Ostia Antica, so put on decent walking shoes!
Posted by Lee Laurino at 7:59 PM